BUT   …  the music was incredibly beautiful.  To please myself and the immensely talented young composer, I decided to learn it and record it for You Tube.  But I was completely unprepared for the difficulty in highlighting each entry of the fugue theme while keeping the other voices in proportion.  One section particularly confounded me and as I gradually became more familiar with the piece and began to smooth out the rough edges, that one section refused to capitulate to my efforts. It remained intransigent.  Each time I reached the bottom of the third page of the music, I stiffened up in anticipation of the hurdle ahead of me.

And each time I predictably stumbled.   How many times would I have to play this relatively simply four page fugue without an error?  After three degrees in music and years of teaching, there I was as inept as a second year piano student fumbling with the notes.   And just as uneasy every time “the hard part” loomed ahead of me as if I were a beginner.   I was disgusted with myself.

So did what I do, when stymied with some problem.   I located a bar of chocolate and my neck pillow.  I adjusted the pillow and unwrapped the chocolate and lay down on my sofa to think things over a bit.  And under the influence of all those endorphins stimulated by those delectable cocoa beans, I had my answer almost immediately.

It was a combination of two lessons I had insisted all my students learn and use from their very first weeks at the piano. The first lesson was to Never play a wrong note and Always use the correct finger and  Think before you play .  ( See  “The Best Learning Trick Ever”  )

And the second was to to take whatever bit was giving trouble, draw a box around it and play ONLY that portion twenty times.  Slowly with each finger in place on the correct note.  Then gradually increase the speed to no faster than the comfort level.  If you stumble, then pull back to a slower tempo. 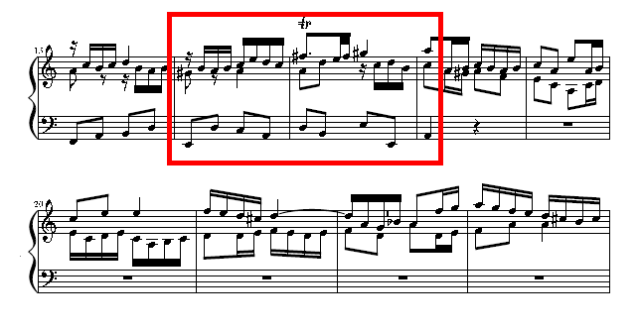 As I got up and sat down again at the piano to wrestle with the fugue, I suddenly remembered Pierre, a  stubborn little boy who loved his music but frequently became frustrated  when he made an error in an otherwise perfect performance.   He’d bang his hands angrily on the keys as if they were at fault and tears would gather in his eyes. Mumbling “merde” under his breath,  he’d insist on starting all over again.  Which delayed the lessons considerably.

I kept insisting he should focus on the part giving him difficulty and play ONLY that part several times until he got it smoothly.  But unless I physically covered the music around the offending portion with my hands,  he simply began all over again from the first page. This became a recurring struggle until one day, with students beginning to pile up in my studio, I grabbed a pair of scissors and snipped out the trouble spot.   I taped it neatly into Pierre’s lesson planner and tossed the rest of the music behind the piano.  His eyes widened in horror and for a dreadful moment, I thought he would cry.

“Now just practice that part, dear   …. all week ….     And your scales and the Hanon.  Start slowly and play it twenty times everyday. ”

As I looked into his stricken face I leaned over and gave him a reassuring pat on the back.  ” You’ll see.  It will work like magic.   And I promise you a brand new copy of your music next week. ”   I rolled my eyes in an attempt at humor as I added,  ” I kinda ruined that one …”

Next week Pierre returned.  And sat down at the piano rather defensively.   But he ripped through that little morsel of music at top speed.  Perfectly.    I clapped and cheered as I made a show of presenting him with a brand new copy of his music.

“Now let’s start at the beginning and see how beautifully you will play it ….”

He did.   And it was a perfect performance.

Now I remembered little Pierre.  I wished I knew what became of him.  He studied piano with me for about three years until  I left Montreal and moved to Hawaii. Now  I wished I could pick up my phone and tell him that now so many years later, he was teaching me.   After twenty  repetitions, I had the fugue perfectly.

The fugue in question is an astonishingly beautiful piece of music by Piotr Tomasz Harasimiuk,   a contemporary Polish composer.  “Fuga in A Moll … con Angry Birds Thema”  is based on the theme from the popular video game, “Angry Birds”.   It is written in the classical Baroque manner  and even to my trained ears, could well be an unknown work by J.S. Bach himself.

Once again, I am deeply indebted to MuseScore. While the digital piano replay isn’t the best for listening, it is perfectly adequate for composing.  And the score downloads are clean as a whistle.

2 Responses to Repeat Repeat and REPEAT!